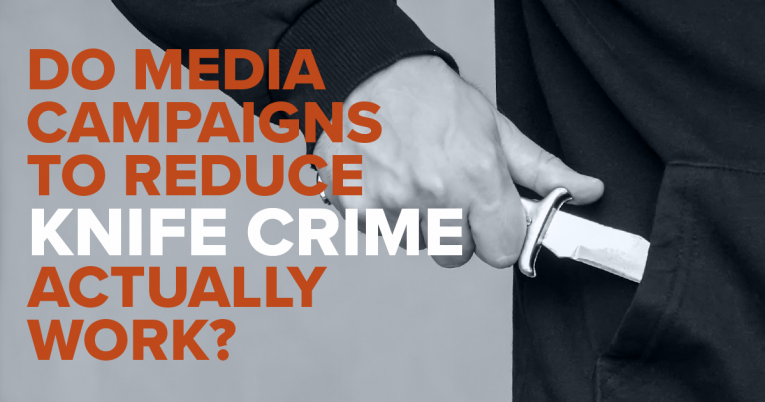 Are media campaigns designed to discourage young people from knife crime actually effective? With UK knife crime continuing to be a major concern, researchers from University College London looked into campaigns by police and anti-knife crime organisations which "focus on the potentially devastating consequences associated with carrying a weapon, with the aim of provoking fear and thus a deterrent effect".

In the paper, Fear Appeals in Anti-Knife Carrying Campaigns: Successful or Counter-Productive?, the authors present their findings "from two experimental studies exploring the effects of exposure to fear-based knife crime media campaigns on young people's intentions to engage in knife-carrying behaviour".

The result? They found that while exposure to knife-related campaign imagery "increased mortality salience" - ie, made viewers think about the potential for death - there was no effect "on willingness to carry a knife or on perceived benefits of knife-carrying".

The authors - Zoë Hobson, Julia A. Yesberg, and Ben Bradford - write: "...the images we used in this study did trigger respondents to think more about death - which we assume was the original intention of those who created them - but this was not linked to their behavioural intentions... There is a potential issue here with pushing images on social media, for mass consumption by people of all ages, which may frighten and disturb them for little or no discernible effect.

"But perhaps the real lesson for anti-knife campaigners is simply that negative messaging may be ineffective, at least in as much as it is disseminated in a more or less untargeted manner. Whether the proposed causal mechanism is rational choice theory or something else, it does not seem that exposing young people to images of knife crime has much of any effect on their views and intentions, at least in the aggregate."


They suggest that there may be more potential in campaigns which promote "pro-social attitudes and behaviours", particularly if they are better targeted.

The authors also recommend that "police organisations and other legal actors involved in anti-violence campaigns should attend more closely to their relationships with those they are targeting," that they should develop positive messages "revolving around the willingness and ability of police and other authorities to intervene positively on their behalf. This would seem both an ethically preferable, and potentially more effective, campaign avenue for those seeking to communicate with young people about their potential knife carrying."