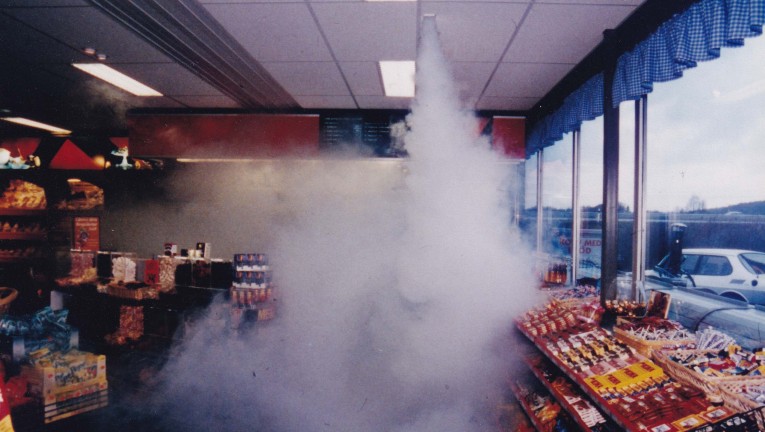 The first installation into a PFS (Petrol Filling Station). This was one of six pilot installations carried out for Tesco. It led to thousands of machines installed in PFS and Express stores the length and breadth of the UK.

Sitting in my home office gazing out of the window I'm taken back to that moment, thirty years ago, when I kicked the children out of the playroom and declared "This is now the sales and admin office for Smoke Screen!" Another Karmic cycle completed; what went around eventually came around.

What a commercially naïve bunch we were. Having spent a couple of years developing what we considered to be the ultimate in proactive electronic and physical security systems, we were keen to plunge into the commercial security sector.

We had identified several routes to market: the police, alarm installers and insurance companies. I can recall early demonstrations and the shocked expressions of our audiences as they were engulfed in rolling banks of dense, white fog. Time and time again we were slapped on the back and confidently assured that this wonderful new concept would make us all millionaires.

Fortunately, at one such demonstration, the audience included a grizzled, world-weary gentleman who, I later discovered, was a much-respected insurance industry risk assessor. He took the time to offer up his counsel. "It doesn't matter what people tell you, no matter how good your product is it will take years for it to become accepted!" It was advice that we took to heart as we dug in and prepared for the long run.

Anyone who has started their own business will attest to the fact that the early years are a little like a rollercoaster ride. Swooping highs followed by gut-wrenching troughs. Waking up at three in the morning wondering how you are going to scrape together enough cash to pay the telephone bill. But we were making progress and the number of Smoke Screen installations was growing. 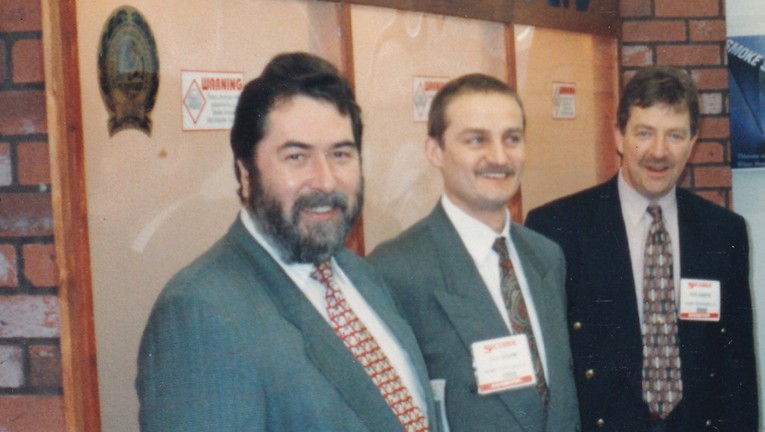 Concept Smoke Screen's first exhibition at Epsom Race Course. Carl Gibbard on the left and Steve Gilmartin of Concept on the right. Chap in the middle was a London-based distributor whose name cannot be confirmed at this point.

Our first 'big break' came in 1996 when we were contacted by one of the country's largest supermarkets. They were suffering break-ins to their on-site petrol filling stations. Thieves were smashing their way into the buildings and stealing cigarettes and lottery scratch cards. A conventional approach was taken to 'hardening' the sites using shutters and grilles. But all that did was raise the levels of violence used to gain entry. CCTV had almost no effect except to produce a growing gallery of faces obscured by balaclavas and baseball caps. The supermarket security team were at that point where they were willing to try anything.

A demonstration of Smoke Screen at our Maidenhead factory was followed quickly by an order for six installations. The sites had been specifically chosen as they were all victims of repeated burglaries. Once installed we sat back and waited. It didn't take long. Within days a bunch of youths attempted to ram-raid a service station. The shop's roller-shutter door was derailed, and they managed to gain entry. CCTV shows them vaulting over the counter, intent on stealing the fags. It then records the iconic images of the Smoke Screen activating and the same youth vaulting straight back over the counter and running for the entrance, empty-handed. Over the next twenty years thousands of supermarkets have successfully used security fogging to defeat an army of ram-raiders and burglars. 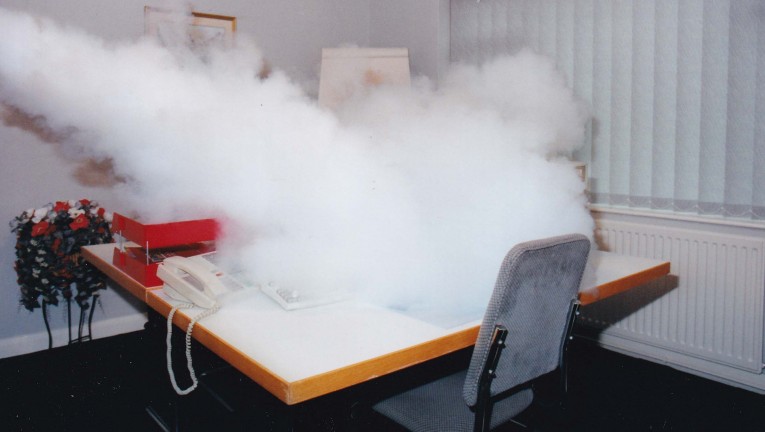 The first office at North End and a demo of an 'E' Series machine.

As the business grew, alongside my three sons, the office migrated from playroom to sun lounge then on to a Portacabin in the back garden. Images of Smoke Screen activations captured from burglaries by CCTV mingle with the sight of my boys playing in the fog when we tested new and evolving models. Eventually the company and my sons outgrew the house and moved on.

1992 to 2022. Three decades have passed and Smoke Screen, like my sons, has grown to maturity. But this is far from the end of the story. My sons have moved on to follow their own careers. Smoke Screen also continues to grow and evolve leading the technology of security fogging and, best of all, defeating the bad guys.

Carl Gibbard was co-founder of Concept Smoke Screen Ltd and a pioneer in the use of smoke and fog in a security role. Currently chair of the BSIA Export Council and Vice Chair of the Security Equipment Manufacturer’s Section.